According to Adam Schefter, the Bears are hosting WR Keith Kirkwood for a visit on Wednesday. 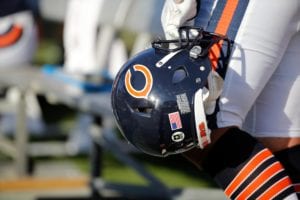 Kirkwood has played for the Saints and Panthers, primarily as a special teamer.
Kirkwood, 27, originally signed on with the Eagles as an undrafted free agent out of Temple back in 2018 but was released after a few days and was added by the Saints. He was among New Orleans’ final roster cuts coming out of the preseason before re-signing to their practice squad.
The Panthers signed Kirkwood to a contract in 2020 after the Saints declined to tender Kirkwood a restricted contract. Kirkwood was set to become a restricted free agent in 2021 but returned to Carolina on another one-year deal. He was waived coming out of the preseason and bounced on and off their practice squad the rest of the year.
For his career, Kirkwood has appeared in 13 games for the Saints and Panthers while catching 17 passes for 239 yards receiving and two touchdowns.
Be sure to follow NFL Trade Rumors on TWITTER and FACEBOOK for breaking NFL News and Rumors for all 32 teams!