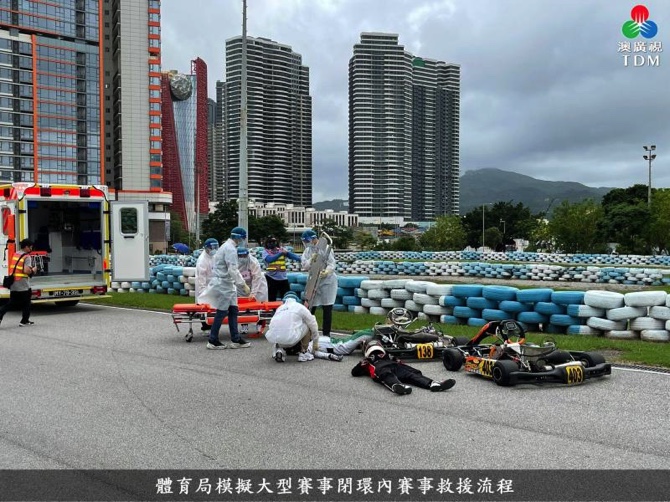 Over the weekend, the Sports Bureau (ID) has tested the feasibility of hosting this year’s Macau Grand Prix in an “airtight” mode, meaning that spectators and other members of the public, including the media, would not come into close contact with competitors.
The trial comes after last week’s confirmation by the Times that some international racers who had regularly competed in previous years at the Guia Circuit had begun receiving invitations from the Macau Grand Prix Organizing Committee (MGPOC) to rejoin the racing event after its two-year hiatus.
Using the opportunity of the local karting and motorcycle championships at the Coloane Karting Track last weekend, the ID conducted a trial that simulated a racing event hosted in a closed-loop system. The purpose was to test solutions that could be adopted at the big event set to take place in November this year.
During the trial at the karting track, the venue was categorized into two areas: green and red. The red area was the closed loop where only the racers and essential staff, such as emergency rescuers, were permitted. This minimized the number of people in direct contact with the racers.
The green zone was the area where members of the public and the media could watch the event.
The drill also included “virtual” press conferences and interview opportunities with racers broadcast in real-time. There was also a virtual prize-awarding ceremony.
Pun Weng Kun, ID President and coordinator of the MGPOC, told media at the event that he was pleased with the outcome of the trial, noting that a closed-loop GP is currently being seriously considered as an alternative to medical observation quarantine requirements for all racers and their teams.
As the Times previously reported, lengthy quarantine periods enforced by the local government were responsible for the cancelation of all international events of the local GP over the past two years. Canceled events include the Macau Motorcycle GP, the FIA Formula 3 World Cup, the FIA GT World Cup and the FIA WTCR race for touring cars.
As the Times reported last week, racers have indicated that they are willing to rejoin the competitions in Macau on the condition that restrictions imposed on entry to Macau are removed or significantly reduced.
The second trial had initially been scheduled for yesterday afternoon, but was canceled after the news of the potential community outbreak of Covid-19.  The news led Chief Executive, Ho Iat Seng, to issue an order for a state of immediate prevention effective from 1 a.m. Sunday.
The order necessitated the cancellation of all public events as well as restrictions on privately hosted events, and later that morning a new round of community mass testing for Covid-19 was announced.