Disney is going to be hosting a special screening of the classic 1980s film, “Willow”, at The El Capitan Theatre in Hollywood on November 28th 2022.
Experience “Willow” back on the big screen in a special LIVE event available only in select theaters. Plus, see a live Q&A with the cast and filmmakers of the new Disney+ original series “Willow”, followed by an exclusive sneak peek of the new magical series.
Panellists include the director of the original movie Ron Howard and cast members from both the original movie and the new Disney+ series, including Warwick Davis, Kevin Pollak, Dempsey Bryk, Ruby Cruz, Ellie Bamber, Tony Revolori, Erin Kellyman, Amar Chadha-Patel and Jon Kasdan. 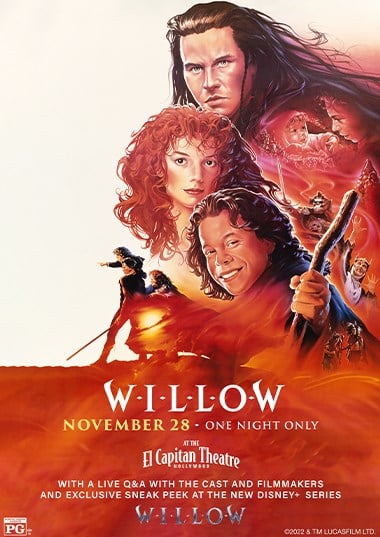 The original film tells the story of what happens when a good-hearted farmer named Willow Ufgood discovers a baby girl prophesized to end the rule of the evil queen Bavmorda, he sets out on an adventure to return the child to her people. Encountering all manner of creatures and characters, Willow finds both companionship and villainy, along with a newfound skill as a sorcerer.
The event starts at 4:30 pm and tickets for the event are priced at $15 for all ages.   Tickets are on sale now at www.elcapitantickets.com and https://www.fandango.com/el-capitan-theatre-aacon/theater-page.
The new “Willow” series is coming to Disney+ on Wednesday, 30th November 2022, and the original film is also available to stream now.